Children are More Than a Dot on a Graph

Some kids dream of becoming an astronaut, a lion tamer, or a rodeo star. As a child, I never had outlandish aspirations. From as early as I can remember, I always dreamt of becoming a teacher. My dream came true in 1997 when I secured my first position as a fourth grade teacher. 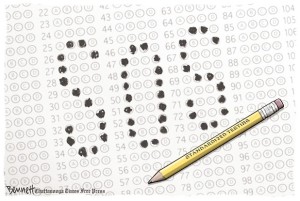 During the first few years of my career, I felt as if I had won the lottery. I was proud to cultivate an environment where kids felt safe to be creative risk takers. I had the freedom to enrich the curriculum as I deemed appropriate. When we studied dental health, my students created their own toothpaste brands and made commercials for them. In Social Studies, we explored the regions of the United States and worked in teams to design fantasy vacations from coast to coast. We made recycled paper, and used glitter and glue to design our own constellations in science. My students played theater games to delve deep into literary elements and wrote their own plays using potatoes as puppets. I wasn’t the quirky teacher who went overboard with imaginative projects and tossed the curriculum out the window, nor was my classroom Disney World with desks. I, along with my colleagues, practiced the art of teaching. I worked nights, weekends, and summer vacations enthusiastically planning to wow my students. My first students are now in their twenties and still visit me.  Not a single one has ever said, “Wow, I will always remember that standardized test we took.” Instead, many tell me they still have their Young Author’s book that they wrote, or that they remember doing our signature “happy dance of joy”  to celebrate student accomplishments.

Since 1997, I have witnessed the sad near-extinction of teacher creativity and steady decline of  student engagement. Education has become a data-driven monster that sometimes treats children like widgets. Teachers are expected to deliver mandated instruction and not deviate. Students are not given ample opportunity to stretch their imaginations. High stakes testing has invaded every aspect of education.

Are we creating a generation of anxiety-ridden children who derive their self-worth from a test score? Teachers’ evaluations will soon be tied into student achievement, which I fear could potentially extinguish the last glimmer of teacher creativity in the classroom.

I wholeheartedly agree that teachers need to be held accountable for student learning. I also think that teachers who are no longer invested in the profession should be eliminated. However, I believe these objectives have inadvertently sucked the joy out of teaching and learning.

Two years ago, my daughter, Emi, had an incredible second grade teacher. Mrs. L. fused the art and science of teaching perfectly. Even though she’s now in the fourth grade, Emi still visits Mrs. L. each day after school. I know my daughter grew academically and socially while her joy for learning, and self-esteem sky rocketed.

Toward the end of second grade, Mrs. L. gave each child some pumpkin seeds to plant over the summer. She cautioned the children not to be disappointed if their seeds did not produce a pumpkin, because pumpkins take a lot of care and attention. Emi and my husband carefully planted the seeds according to the directions and dutifully watered them. To her delight, the seeds began to grow and we could see the early formation of not one, but two pumpkins. We took many pictures of their growth and Emi insisted on emailing them all to Mrs. L. I warned that Mrs. L. might not check her school email over the summer, but she emailed back every time. Last year on Halloween, Emi told anyone who would listen that the pumpkins sitting on our front steps were grown from her second grade seeds. 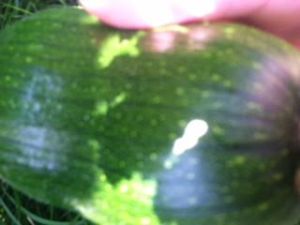 I could reflect on the Common Core Standards that Mrs. L.’s project targeted and “prove” the academic merit of Emi’s pumpkin planting endeavor. Lucky for you and me, I won’t. However, that’s essentially what is required of teachers in public education for every single lesson taught.

Emi will forever cherish her second grade year with Mrs. L. and the memory of watching her pumpkins flourish. Mrs. L. is one of the most dedicated, warm, and effective teachers I’ve ever seen. Guess what? Based on Emi’s test scores, Mrs. L. would be given the lowest ranking on her teacher evaluation. Where we live, a child’s academic growth is (in part) based on his/her MAP (Measure of Academic Progress) scores. Teachers may soon be judged on a child’s RIT score growth from Fall to Spring. Emi’s RIT scores dropped dramatically in both math and reading during her second grade year. How could that be, when she had such a talented teacher? Emi was sick the days the MAP tests were administered in the spring. She was pulled out of class when she returned to make up the tests. My daughter rushed through her tests so she could get back to Mrs. L’s room. Mrs. L. and I both know that, but that’s not what the official report will reflect.

I know the evaluation of students and teachers is a colossal controversy in our country and incredibly complicated. We must find a reasonable balance that will honor both the art and science of teaching. I hold high hopes that the future of public education in America will be bright for our students. I know it can’t all boil down to the simplistic act of a little girl growing pumpkin seeds. But I have to think that the sweet morsels of childhood are an inalienable part of the equation.