To All the Adolescent Freaks, Geeks, and Losers, It Gets Better!

Allow me to paint a picture of what my life was like as an adolescent. I was weird-looking, awkward, and different from my peers in every way. Here’s proof:

Exhibit A.: I was diagnosed with scleroderma at age 10. This disfiguring autoimmune disease ravaged my body and drastically altered my appearance. I was covered in red and purple spots, had skinny and contracted arms and legs, tiny lips, mangled fingers and a woefully flat chest.

Exhibit B:  My father suffered from bi-polar disorder. My parents divorced when I was 6 and my sister and I were mandated by the courts to visit him in his filthy unheated apartment. By age 10, we had stopped seeing my father and I spent the rest of my childhood and adolescence dodging questions about my dad’s absence.

Exhibit C: My mother remarried when I was 9. Living with my step-dad was not easy.  A funny example of this includes all the times he made me return Depends undergarments to discount stores because he had been banned from doing so after abusing their return policy. Nothing says cool like a 16-year-old wandering around K-Mart with a shopping cart full of adult diapers. Why did we need to purchase and then return so many packages of said diapers? I could write a whole post on that alone.  I’ll just say that it had to do with my creepy step-grandmother who lived with us and had suffered a stroke, hence the need for Depends.

Exhibit D: I was raised in a middle-class suburb, but my family’s finances did not match up to those of my peers’. The front of our house looked like a used car lot. Our family cars were old and often broke down. One car had a hole in the floor where you could see the street beneath you (I swear this is the truth- I can’t make this crap up).

If the above evidence does not sufficiently qualify me as an adolescent oddball in your eyes, please click here or here for further confirmation.

If you went through, or are going through a similar adolescence, let me assure you, it gets better!  Here are my time proven tips to surviving your adolescence and moving on to a happy adulthood.

Tip # 1: Try to be a nice person so people will like you despite your weird family and strange appearance. This worked wonders for me. I’ve always had incredible friends who’ve gotten me through the toughest times of my life. Never take your friends for granted and always make time for them. 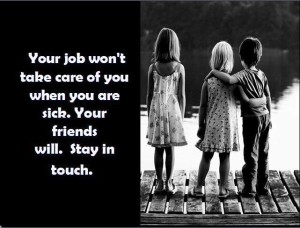 Tip #2:  Find something you like to do and spend as much time as possible doing it. For me, it was high school theatre. This was a place where I could proudly fly my freak flag.

Tip #3:  Try not to be jealous of what others have that you don’t. It’s hard not to begrudge the friend who is driving a brand new shiny red car when you’re not even allowed to drive your family’s old clunker, but resist that urge. Jealousy is an ugly trait that will rob you of happiness. As my mom loves to say, there will always be people in the world who have more than you, so don’t waste your time on jealousy. Plus, the friend with the cool car is the one who will pick you up on Saturday nights (thanks Stephanie!).

Tip # 4: Work hard, go to college, and find a career where you’ll always be able to support yourself. The last thing you want is a situation where you have to go crawling back to the house you worked your entire life to escape from.

Tip # 5: Choose your partner in life carefully. You want to break the cycle of dysfunction, not perpetuate it.

Tip # 6:  Use humor as a defense mechanism. Make fun of yourself and your circumstances before someone else gets the chance. If you’re a loyal reader, you know how I love dark humor.  Rather than avoiding that your childhood home had two televisions sitting on top of one another (one that provided only sound and one that provided only a picture), I say disclose this with a healthy dose of humor. These anecdotes make for great conversations later in life, especially when you can add that one of those televisions was rescued from the neighborhood trash.

So there you have it. I know adolescence can really suck. The cool thing about surviving a crappy adolescence is that it enables you to enjoy and appreciate adulthood. It’s impossible to conceptualize this when you’re deeply entrenched in adolescent hell. Trust me, your teenage war stories will build character and transform you into an interesting adult who tells funny tales about the time her mother locked a live squirrel in the bathroom because she couldn’t afford to have animal control remove it. Again, true story.